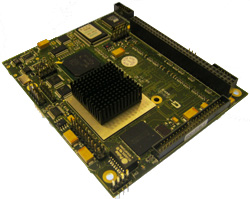 DSL were approached by an internationally recognised leader in transportation solutions with a request to design a PC/104 processor card.

Our client had less than 15 weeks to produce prototypes with a strict criteria including:

In addition there were mechanical constraints both in terms of maximum allowed dimensions and connection positions to allow the board to mate with existing equipment.

Working from the range of available QNX drivers it was evident that in processor terms the choices were quite restricted and of those many would have exceeded the specified power ceiling.
Sampling of processors would prove to be too costly as this product was expected to reach volumes in excess of 1000 units per annum.

DSL engineers concluded that a suitable lower power processor chipset could be provided and at boot time, held in reset until the core temperature had risen to within specification.
DSL was able to provide  a customised bios due to their IA partnership (BIOS creation and maintenance) with Insyde Technologies.

As DSL had existing relationships with pre-qualified (in accordance with ISO 9001:2008 standards) sub contract PCB manufacturers & assembly houses to whom they were already supplying product, they were able to reassign parts to fulfil the urgent requirement.